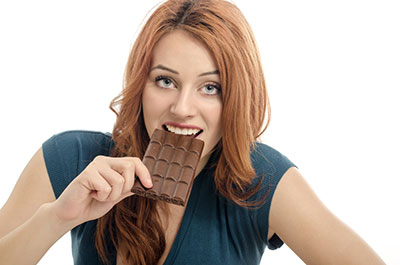 If you’re addicted to chocolate you are not alone. Many people call me with the same problem, asking if addiction hypnotherapy can help. The short answer is: yes it can. But you have to look at the nature of your addiction very closely in order to knock it on the head properly. The first question you need to ask yourself if: ‘is my chocolate addiction REALLY an addiction or just a bad habit I can’t break free from?’

The Difference Between Habits And Addictions Some people think they have a chocolate addiction when it’s actually just a habit. A habit is something you get used to doing so much that it becomes automatic. There are good habits and bad habits and both can be created or broken very easily using hypnotherapy. Habits are easy to change because there is no emotional attachment to the behaviour – you’re just doing it because you’ve always done it. A qualified hypnotherapist can help you remove the subconscious patterns that perpetuate that habit. On the other hand if you’re eating chocolate to fill a deeper need, that’s going to require a more complex approach. Many people use food, and in particular, chocolate, as a way to:   In these instances eating copious amounts of chocolate is used as a crutch for these underlying issues and therefore you need to get underneath and find out why you’re doing it.

Anita Was Addicted To Jelly Lollies

She called me up and said ‘I saw a hypnotherapist who cured me of my chocolate addiction. But now I’m addicted to jelly lollies’. She asked me if I could cure this addiction, and I said ‘it depends on what’s behind that addiction and whether you’re prepared to do the work to find out’. Anita was convinced that her behaviour was habit driven, but my instincts told me otherwise. Further exploration revealed that Anita’s self-esteem was almost non-existent and that she had deep seated body image issues (and body dysmorphia). She would restrict her food intake and deny herself any treats for a period of time and then when it all became too much she would go on a binge. Anita wanted to stop eating all junk food because she believed her body was unacceptable and the only way to correct this was to lose more weight. From my perspective, Anita was a normal, healthy weight and the real problem was her self-punishing behaviour that was a direct result of her negative belief systems. However, since she was not willing or able to address these issues I was not able to work with her. At the end of the day, if I took away her jelly lolly addiction she would have found something else to be addicted to. The subconscious mind finds loopholes that way. If you’re addicted to chocolate I can help you find the cause and solve the problem! Get in touch with me on my contact page and we can discuss a plan of attack for your addiction.