Welcome to the third part in this series on the key to permanent weight loss. In the last 2 posts, I explained the key difference between the symptoms of your weight problem and the causes, and why addressing one element without the other will not work.

We did a deep dive into the first of 5 causes of weight problems, which is negative beliefs, and we explored the direct role your thought patterns play in helping you reach and maintain a healthy weight.

In this post, we’re going to concentrate on the second common cause of weight problems, which is stress, anxiety and fear.

You’ll learn why we get caught up in needless worry, even though 80% of what we worry about doesn’t eventuate. You’ll see how these fears can infiltrate your daily life and become triggers for emotional eating.


Why We Sweat the Small Stuff Often it’s the little day to day stresses that have the biggest impact on your physical health. Also, negative past and current circumstances have a way of building up in our subconscious.

I like to describe it as a barrel of sludge that accumulates over time.

If you don’t have an effective means of emptying that emotional barrel, more and more emotions get pushed down into that barrel until eventually it becomes so full that you can’t cope any more.

Many of my clients hate getting worked up over small stuff, so they often say: ‘I’m just being silly’ or ‘I should just get over it.’ But when shut ourselves down in this way, that just adds to the feelings of isolation and hopelessness.

The habit of stress and worry is far more common than you think. That’s because most people in your environment only show you what they want you to see.

We like to put our best foot forward when others are around because we want to be perceived as someone who’s got it together. Scratch below the surface and you’ll see start to get a different perspective.


The Origins of Worry

Back in the days when we hunted and gathered in groups of 100, our ancestors’ lives revolved around making many decisions in relation to approaching a reward or avoiding a hazard.

In some ways, life was pretty simple back then. There was no social media, television or shopping malls – on the flip side, though, the potential for physical threat was much higher.

Also, our ancestors had to work a lot harder than we do just to get their basic needs met.

So, back then, life was pretty much about getting carrots and avoiding sticks. If you missed out on a carrot one day, there was a pretty good chance of getting one the next day. But if you got the stick – then that was it. Life was over.

So, in terms of priority, avoiding the stick won out every time. According to neuropshychologist Rick Hanson, our brains are hard-wired to seek out and avert negative stimuli, for our own survival.

There’s a part of your brain called the amygdala, which is an alarm bell designed to go off in the event of perceived threats.

Because our ancestors had to be on high alert for these threats our brains evolved to store negative events and experiences into memory very quickly.

By comparison, positive experiences need to be held in our awareness much longer before they get stored in our memory. That’s why we’re more motivated by pain than pleasure. 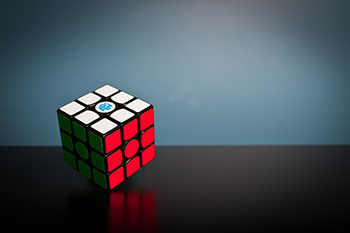 So how do we overcome the workings of a brain that seems to be doomed to seek out and perpetuate negative stimuli while glossing over positive stimuli?

We need to flip the switch and actively train your brain to look for, remember and store positive experiences into memory.

In any given day, we could have 15 or 20 good experiences, from receiving positive feedback at work to enjoying a delicious cup of coffee.

Yet if one bad thing happens in our day, we tend to focus on, talk about and perpetuate that one thing over and over, while simultaneously discarding or trivialising the many positive or neutral experiences that have occurred.

In any given day, there are a lot of things we can stress over. And if you let your mind have its way, it’ll take you to the fear because that’s how it’s wired.

We don’t want to keep the fear alive – we want to let it go. So you let go of it a little bit at a time, by focusing somewhere else.

Fear is an indication of split energy.

And usually by the time you would describe it as fear, you’ve been focused on a subject long enough that it’s got a lot of momentum going.

So It’s about being aware of what you’re doing or thinking when fear is engulfing you and by becoming mindful of your triggers and taking steps to retrain your mind.

Then you can override the old programming that makes you overestimate the negative impact of your perceived threats.


Talking Yourself Off the Ledge 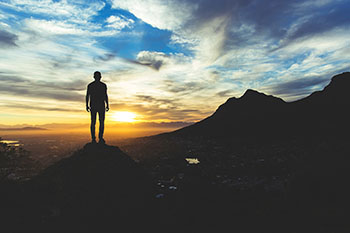 As I mentioned before, sometimes the fear you’re feeling has got so much momentum going that you’re just not going to be able to feel better about it right away.

But other times you can catch it at an early stage.

Often my clients try to soothe themselves by repeating the affirmation ‘everything will be alright’. They’re perplexed to find that this doesn’t work very well.

Why? Because nobody has a crystal ball. You really don’t know if that situation you’re worried about will turn out okay.

But it can be helpful to reflect that for the most part, most of us are doing okay. So here’s one affirmation statement I like to use with my clients that by and large is generally true for most people and that is:

If you think about your life and how you got to this point, you’ll see there have been many twists and turns, both good and bad.

Sometimes a situation that seems dire at the time often ends up being a catalyst for something good.

Everybody experiences stress and anxiety; it’s part of our genetic makeup. But the good news is, needless worry can be overcome by training your mind.

In the next post we’ll go deeper into three specific topics that most people worry about more than anything else, and why these have a significant impact on your appetite, weight and overall physical wellbeing.

In the meantime…if you’d like to know more about permanent weight loss via hypnosis for weight loss Melbourne, contact me here.